Elizabeth Imus-Zero is a moron. She claims to be an award-winning writer…and she is…but the people who gave her the Scriptapalooza award are idiots. She can’t spell for shit and she does this thing when she’s writing where she writes the lame basic word she knows and then she right clicks the thesaurus feature and changes the lame word to a big word so people think she knows big librettos. When she speaks, notice how many times she uses the word “amazing.”

Elizabeth claims to be an amazing comedian but what she doesn’t realize is that people are laughing at her. She used to write and produce special features for DVDs. DVDs are round things that your parents watch pornos on. Elizabeth co-wrote, produced, directed, and performed the critically acclaimed sketch comedy show, “We’re Blonde and Pretty; What Happened to You?” and “Girls Who Say Yes!” She’s a graduate of the Groundlings School and The Second City....which are like Princeton for people who can’t add simple numbers or write complete sentences. Elizabeth graduated with honors from The Career Academy of Beauty. Graduating with honors from beauty school means by the time she finally graduated from being locked up with toothless juvie skanks, her hair was bleached to the consistency of cotton and she was pregnant.

Somehow she managed to raise two lovely children into adulthood and there is absolutely no legitimate reason why these two kids are not locked up behind bars or complete idiots themselves. The only explanation anyone can muster is that insanity skips a generation. However, considering that Elizabeth is the daughter of radio and television host, Don Imus, insanity must then skip every two generations.

Somehow she’s managed to con a lot of people into giving her money to write and perform comedy…but most people assume she’s fucking them.

If you’ve met Elizabeth Imus-Zero before, chances are she will never remember meeting you. Most people Elizabeth meets are lame and boring compared to the circus that is constantly performing in her head. Elizabeth’s boobs and nose are fake...however she is gluten and dairy free.
Books by: Elizabeth Imus-Zero 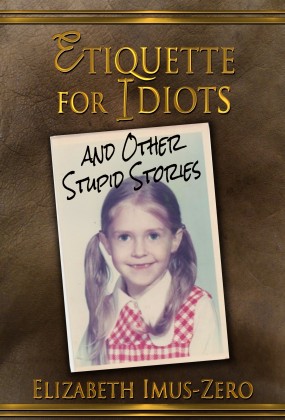