Marked for life by reading Dracula at the age of twelve, Margaret L. Carter has specialized throughout her career in fantasy and the supernatural, especially vampires. Earning de-grees in English from the College of William and Mary, the University of Hawaii, and the University of California (Irvine), she wrote her dissertation on the Gothic novel. Her first novel was Shadow of the Beast. Margaret’s vampire novels include Dark Changeling (2000 EPPIE award winner in horror), Child of Twilight (its sequel, 2004 EPPIE award finalist in horror), Sealed in Blood and Crimson Dreams. Combining her focus on re-lationships and getting inside the mind of the “monster” with her lifelong devotion to horror and fantasy, she has branched into paranormal romance with From the Dark Places and her short story collection Heart’s Desires and Dark Embraces. She has several erotic romance stories published. Margaret’s scholarly work on vampirism in literature includes The Vampire in Litera-ture: A Critical Bibliography and Different Blood: The Vampire as Alien, as well as a number of articles. Her short stories have appeared in various anthologies and small press publications. With her husband, retired Navy Captain Leslie Roy Carter, she has published two fantasy novels, Wild Sorceress and Besieged Adept. Margaret’s newest releases include: Embracing Darkness and “Demon’s Fall.” 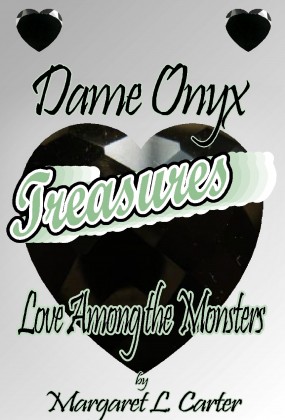